The stories we tell ourselves about inequality 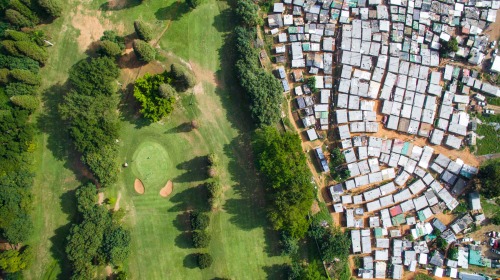 South Africa today is the most unequal country in the world. The richest 10% of South Africans lay claim to 65% of national income and 90% of national wealth; the largest 90–10 gap in the world. These inequities are mirrored in the education system where we have 20% of schools that are broadly functional, and 80% that are mostly dysfunctional. Because of this, two decades after apartheid it is still the case that the life chances of the average South African child are determined not by their ability or the result of hard-work and determination, but instead by the colour of their skin, the province of their birth, and the wealth of their parents. These realities are so deterministic that before a child’s seventh birthday one can predict with some precision whether they will inherit a life of chronic poverty and sustained unemployment or a dignified life and meaningful work. The sheer magnitude of these inequities is incredible. We have private schools charging R300,000 a year, and public schools where children drown in pit latrines. Last year (2018), the top 200 high schools in the country had more students in matric achieving distinctions in Mathematics (80%+) than the remaining 6,600 combined. Put differently 3% of South African high schools produce more Mathematics distinctions than the remaining 97% put together.

In a few years’ time when we look back on three decades of democracy in South Africa, it is this conundrum – the stubbornness of inequality and its patterns of persistence – that will stand out amongst the rest as the most demanding of explanation, justification and analysis. This is because inequality needs to be justified; you need to tell a story about why this level of inequality is acceptable or unacceptable. As South Africans what is the story that we tell ourselves about inequality and how far we have come since 1994? Have we accepted our current trajectory as the only path out of stubbornly high and problematically patterned inequality? Are there different and preferential equilibria we have not yet thought of or explored, and if so what are they? In practical terms, how does one get to a more equitable distribution of teachers, resources or learning outcomes? And what are the political and financial price-tags attached to doing so?

Our post-apartheid education system is currently an awkward fusion of apartheid systems serving post-apartheid societies. What the apartheid government used to perpetuate privilege and to act as a lever for rapid poor-White social mobility, post-apartheid society uses as a lever for Black middle-class mobility. Today Black and Coloured learners make up 60% of those attending former White-only fee-charging schools. Thus, a small, separate and functional school system, created to privilege one section of the population and exclude others remained intact but the discriminating principle simply morphed over time from race to fees. We now have a ‘pay-to-play’ system. If you want your child to have a decent shot at life, you need to get them into a good school. In that sense, school fees have become the current price of dignity in South Africa.

Reflecting on our particular journey out of apartheid, we can see that our country has become a case study of how politics and policy interact with unequal starting conditions to perpetuate a system of poverty and privilege. We are witnessing a process unfolding where an unjustifiable and illegitimate racial education system (apartheid) morphs and evolves to one that is more justifiable and somewhat non-racial, all the while accommodating a small privileged class of South Africans who are not bound to the shared fate of their fellow citizens.

The post-apartheid government has made important strides in trying times; educational outcomes are really improving, the Child Support Grant has significantly reduced poverty and deprivation for large swathes of the country, and access to basic services have undeniably improved across the board. Yet we must also be honest and say that our collective political imagination has come up short. We lack a believable vision of a more equal country where everyone has basic dignity, and even more so, we lack a believable plan of how to get there.  While there has been some tinkering around the edges of the political and economic possibilities available to us, we cannot point to a country-wide initiative that has made significant inroads into the gross inequity that is visible everywhere we look.

We need bolder policies and bolder politicians. We need our elected officials to actually visit the pit latrines that our children drown in. Consultants prophesying coding and tech must actually speak to children in the 26% of South African schools that still don’t have running water in 2019. Let them drink laptops. Surely we can muster the political will and societal shame to put an end to these visceral daily injustices? We need officials who have the courage and the mandate to fire corrupt or incompetent officials currently shuffling between government ministries with no consequences. But we also need those with the moral clarity to take on comfortable elites who resist wealth taxes, land reform and social housing. Whatever the story is that we keep telling ourselves to justify our obscene levels of inequality, the poor and excluded will not believe it forever.

This article first appeared in the Financial Mail on the 24th of October 2019). It is an extract from my chapter in our new book “South African Schooling: The Enigma of Inequality” which is co-edited by myself and Jonathan Jansen (published by Springer in November 2019).

This entry was posted in Education, Popular press, Uncategorized. Bookmark the permalink.

3 responses to “The stories we tell ourselves about inequality”