On UFS brutality: No peace without justice

“Justice requires not only the ceasing and desisting of injustice but also requires either punishment or reparation for injuries and damages inflicted for prior wrongdoing. The essence of justice is the redistribution of gains earned through the perpetration of injustice. If restitution is not made and reparations not instituted to compensate for prior injustices, those injustices are in effect rewarded. And the benefits such rewards conferred on the perpetrators of injustice will continue to “draw interest,” to be reinvested, and to be passed on to their children, who will use their inherited advantages to continue to exploit the children of the victims of the injustices of their ancestors. Consequently, injustice and inequality will be maintained across the generations as will their deleterious social, economic, and political outcomes.”

Watching the racial dynamic cluster-fuck that is unfolding at our former White-only universities in South Africa feels like a kind of national de-ja-vu; the revisitation of the ghosts of apartheid. White brutes beating Black protesters in an attempt to protect their privileged way of life even as the legitimate demands of the working class become un-ignorable.

Land, fees, language, inequality…IMHO all of these boil down to a lack of adequate reparation and restitution at 1994. Too much fake kumbaya, too little real redistribution. As an artificial group ‘selected’ and ‘glorified’ by apartheid, White people did not offer up an unqualified admission of guilt and of unlawful enrichment as apartheid ended. Forgiveness was offered before it was asked for. Looking back over the last few years, or looking ahead at the elections to come, the topic may change but the tune is the same – people that have been consistently fucked over by colonialism, apartheid and now a self-enriching elite are eventually saying “Enough is enough, we also want a dignified existence.”

Posted in Me, Quotes, Uncategorized

In the Olden Days there were no women…

“A rising number of school leadership changes have been occurring in South African schools as a large proportion of incumbent principals near retirement age. While this presents opportunities to replace weaker school principals with better performing ones, these changes may also destabilise school environments and impede on learning. This paper explores how these principal change events affect school performance in the context of South Africa using a unique administrative dataset constructed by linking payroll data on the population of public school principals to national data on schools and matriculation examination outcomes. Exploiting the panel structure of the data, a school fixed effects strategy suggests that principal changes are indeed detrimental to school performance especially when leadership changes are due to principals exiting the public education system. These results are robust to using an alternative estimation strategy proposed by Heckman, Ichimura and Todd (1997) which combines propensity score matching with a difference-in-difference estimation strategy. The paper also considers two mechanisms through which school leadership changes may impact on school performance, namely through rising promotion rates and teacher turnover” 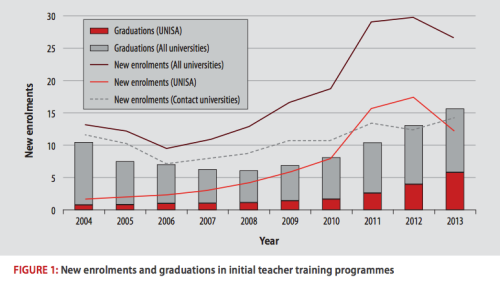