As we start versioning the Funda Wande: Reading for Meaning program into other African languages we are recruiting for two positions for 2019: (1) Applied Linguist, and (2) Sotho Language Specialist. See job profiles below. For more details and to apply click HERE. 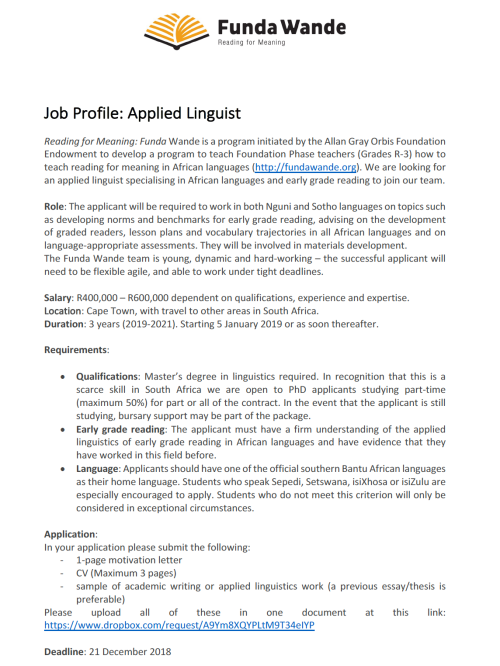 Presenting to the President

Last month I got to meet President Ramaphosa as part of a roundtable he convened on the topic: “Strategies for long term prosperity: What would it take to place South Africa on a higher-growth trajectory?” There were 18 economists from academia and industry who were asked to give input on the topic. It doesn’t take a genius to guess that my presentation was entirely about education and getting the foundation right in Grades R-3. I’ve included my 3-page write up here and also below.

“What would it take to place SA on a higher-growth trajectory?”

Overview: The president has asked about two things (1) How to increase economic growth, and (2) how to share the gains of that growth. This note argues that neither of these two things are possible with the current broken primary education system. Currently less than half of South African children acquire basic skills in literacy or numeracy in primary school, they do not pass matric and they do not get jobs. The dysfunctional basic education system is the binding constraint to long-term inclusive economic growth. Ensuring all children learn to read-for-meaning and calculate-with-confidence by age 10 must become the apex priority of government. There is no route to a more equitable and prosperous South Africa that does not first chart the path of a radically improved primary education system. This is a difficult sell in the short-term but it is really the only way to a truly transformed South Africa. 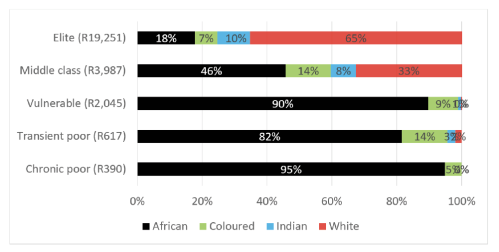 The Root of the Problem

The dysfunctional primary schooling system: Of 100 children that start school, approximately 60 will reach and write matric, 37 will pass and 12 will access university. Only 4 will complete an undergraduate degree within 6 years. Low through-put rates and weak performance in high school is rooted in weak foundations from primary school (Spaull & Kotze, 2015, Van der Berg et al., 2016).

Lack of foundational reading skills: Learning to read for meaning is the most critical skill children learn in primary school. It is the skill upon which all other skills depend. The South African curriculum stipulates that children should be able to read for meaning by the end of Grade 3 in their home-language and in English. The recent Progress in International Reading Literacy (PIRLS 2016) study showed that 78% of South African Grade 4 children could not read for meaning in any language, that is they could not “locate and retrieve an explicitly stated detail.” Comparable figures in other countries are 64% (Morocco), 35% (Iran), 13% (Chile), and 3% (United Kingdom) (Mullis et al., 2017a).

Lack of foundational mathematical skills: Learning to use the four operations effectively and with confidence is one of the most essential mathematical skills children learn in primary school. According to the Trends in International Mathematics and Science Study (TIMSS 2015), 61% of South African Grade 5 learners could not do basic mathematics, that is they could not add and subtract whole numbers, have no understanding of multiplication by one-digit numbers and cannot solve simple word problems. (Mullis et al., 2017b)

Radical prioritization and focusing on Foundation Phase:. The first step towards fixing the education system is ruthless prioritization. South Africa does not have the financial resources, political capital or human expertise to solve many problems at the same time. Policy-makers and politicians needs to accept that underperformance in matric and high drop-out rates are rooted in weak foundations in primary school and specifically in Grades R-3. If 78% of Grade 4’s cannot read for meaning in any language they are precluded from success at school.  In mathematics, only a third of South African children are equipped to succeed which can reliably be traced back to primary school. We typically look at the approximately 360,000 matrics who pass (30%+) either Maths or Maths Literacy in 2017 which is about 36% of the original cohort. Yet if we look at Grade 9 we see that only 34% of Grade 9’s could do basic maths (TIMSS 2015), and if we look even earlier at Grade 5 we see that only 39% of Grade 5’s acquired basic numeracy (TIMSS-N 2015).

A ‘Marshall Plan’ for early grade reading and numeracy focusing on teachers:. Reforming the basic education system is not possible without changing (1) who is recruited into teaching, (2) the way that teachers are trained at universities and in schools, (3) the ways that teachers are deployed across schools, and (4) who has access to the functional part of the schooling system. None of these reforms are possible without significant buy-in from the majority teacher union, SADTU, which is itself not possible without the ruling party expending significant political capital. Being more selective about who is accepted to teacher training programs, providing existing teachers with meaningful learning opportunities, and incentivizing the best teachers to teach in the most challenging contexts will not be possible without additional resources and political will. We need a “Marshall Plan” for Reading and Numeracy and to drastically expand promising programs like the Early grade Reading Study (EGRS), which have been piloted, rigorously evaluated and shown to be successful in the North West and Mpumalanga. With a small army of reading coaches, resources, and lesson plans you could reach half of all primary schools within 8 years. It would cost R1,3billion per year.

A wise president: It’s true that there is no silver bullet to improving basic education, and yes, change in education takes a long time – certainly more than one term. However, there is no route to a more equitable and prosperous South Africa that does not first chart the path of a radically improved primary education system. A wise president, and one who will almost certainly win the election in May 2019, would realize that while improving basic education is a difficult sell in the short-term, it is really the only way to a truly transformed South Africa.