I find myself doing this a lot these days. Smiling. Things aren’t always great, and sometimes I get stressed, but there’s always more to be grateful for than we realize.

The work notch is scaling up from time-for-contemplation to all-systems-go. In between marking essays and exams, learning for my own exams, and creating a crazy-cool curriculum for next semester, somehow I need to figure out what’s going on in education in South Africa – no mean feat I can promise you! And then there is this hovering sense of unknownness I can feel every now and then. I know it’s coming but have no idea what on earth it is.

Family reunion this weekend! Really, really looking forward to it! 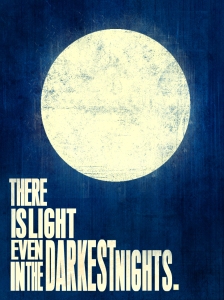 That’s true, nobody said it was easy, but somehow we have this notion ingrained in our public consciousness – life is not supposed to be so difficult. Um, ya…fail – it is. Whenever something bad happens or life isn’t just a box of chocolates, we think that’s not normal – reality check – it is. Life is difficult. Life is hard. Pain is necessary for growth. We need each other and we need God. So the next time I start hitting the slippery parts of this track of life I’m going to tell myself: ‘Nobody said it was easy’ but I’m going to add another phrase: ‘but it is worth it‘.

So today I discovered:

It’s a wonderful smorgasboard of creativity. I was practically clicking my heels as I went to work today after I discovered the awesome site. You really should check it out. Seriously. So I’ve decided that for the next week I’m going to post at least one image a day (from Workisnotajob) with a very brief comment of my own.

There are a few things that I am sure of in this life.

I know that people are more important than possessions.

Life without God is not only meaningless, it is largely unmanageable (if you haven’t got to the unmanageable part, just wait).

Technology and the Internet are an integral part of the future – dismiss them at your peril.

Life without learning is is like drinking the best wine in the world and thinking it tastes the same as an Al-Cheapo no-name brand.

So yes, I agree with the picture. The future does belong to the few willing to distinguish sense from nonsense.

The last 30 days in my life have been very eventful. I am beginning to gain intellectual momentum and starting to understand how to learn. Notwithstanding the above, I think that this video is one of the top three most significant things I’ve read or seen this year. Brene Brown, a ‘vulnerability researcher’ explains her findings in 20 minutes on TEDx. The truth contained in her talk has the power to transform the way we live and how we evaluate what is happening to us. Highly, highly recommended!!

A brief overview from Brain Pickings

“Brené Brown‘s fantastic talk from TEDxHouston deconstructs vulnerability to reveal what she calls “wholeheartedness”: The capacity to engage in our lives with authenticity, cultivate courage and compassion, and embrace — not in that self-help-book, motivational-seminar way, but really, deeply, profoundly embrace — the imperfections of who we really are”

So I have an econometrics test in a couple hours, but couldn’t help quickly scrolling through this 88-page photo journal capturing the adventures of 40 travel bloggers. Loads of photos that just make you want to book a plane ticket to somewhere, anywhere!

The world’s a big place, how much of it have you seen?

Why can’t I hear God?

Interview with Eugene Peterson
Why Can’t I Hear God?
By Nancy Lovell

Readers of the best selling Bible, The Message, find themselves holding onto lines from his fog-slicing Bible paraphrase and many other works.

Recently, we asked the man himself: What are devotions and why do they matter in our daily work?

Why do so few people who believe in God bother to know Him?

The most obvious answer is that we’re in a hurry and not used to listening. We’re trained to use our minds to get information and complete assignments; but the God revealed to us in Jesus and our Scriptures is infinitely personal and relational. Unless we take the time to be quiet, in a listening way, in the presence of God, we never get to know him. The same question is why so few married couples really know their spouses. People get divorced after 20 years of marriage, and the rejected spouse says, “I never knew this was coming. I thought everything was fine.” But there was not much listening in those 20 years.

Devotions are the discipline of being quiet and listening for what we don’t hear in the streets, in the media, in the workplace.

What about people who sincerely set apart time, read the Bible, stay still, and hear nothing? They ask themselves whether God’s voice is anything more than their own thoughts.

We’re not good at this. We’ve had no practice doing it. No wonder we only hear our own thoughts. This is why the church is so insistent that we do this whether anything happens or not. Supported by 2000 years of history, we know that God does commune with us in our listening. But because we’re so unused to this way of communion, we don’t hear it. So it takes time.

How would you direct someone trying to start?

I would say: Get your Bible and find a place. If you can’t do this daily (some people can’t because of their life circumstances; mothers with young children are obvious instances), try for at least 20-30 minutes, two or three times a week, or four. Don’t make demands on yourself too high. Don’t ask questions about, “How long is this going to take?” Believe that something does happen in that silence—usually through Scripture, but not always—in prayerful, attentive listening, knowing that you’re in the presence of God. I ask for a commitment of six months; don’t come back in three weeks and say nothing’s happened.

I’ve never had anyone who’s done this at least six months who came back to me and said, “I did it and nothing happened; I’m going on to something else.” Not many who give this a fair test ever say that nothing happens.

Also, when I’ve asked people to do this as their pastor, I also ask them to worship regularly. This is a place where the whole community is gathered and listening and being in the presence of God.

Is that how you started?

I was lucky. In the family I grew up in, I started when I was about 14 …mostly with the Psalms, but all the Scriptures become part of it.

In your writing and speaking, you must have seen moments when a person realizes, “Yes, I want more and I want God.” What turns on the light for people?

Often the motivation is that people are tired of the way they’re living. They think there’s got to be more than just the motions they’re going through and the work they’re doing. There’s a craving and hunger that they identify with God. There’s enough pain or boredom or something to motivate them to do something that the culture’s not telling them to do.

I got a letter recently from a friend of 40 years. She had been a parishioner of mine for a long time. Then she was ill, and divorced; and she quit, just gave up. She quit reading the Bible, quit going to church. Six months ago she wrote me a lovely letter that she was sitting with a group of friends and, in her words, “a rooster crowed”—it all came back and she was a Christian again and aware of the presence of God. Isn’t that a wonderful phrase? A rooster crowed.

Who knows what went into that statement of hers? Twenty years of unhappiness, pain, suffering, disillusionment …but still there was the need. She would have said during that time she didn’t believe in God. But the rooster crowed. That’s why we use the term the Holy Spirit to explain times like this.

Given that it’s hard to discipline ourselves to silence, listening—and to daily time in quiet—tell us about your devotions on this website.

I wrote those in the early morning for 20 years, maybe 25 years. And what I was trying to do was be present to the Scripture, listen to God, and to write as honestly as I could. I wasn’t thinking about anybody else but me. It’s really hard to be honest as a writer. You get these wonderful ideas, and you love to manipulate words and see if you can make it sound good. It’s hard to be honest, especially working for God. That was the thing I was most aware of. “Eugene: Don’t say anything that is not relational, immediate, honest; stay present to the text and be honest before God.” I believed if I could be honest, I could draw some other people to honesty, too.

In one of your early devotions, you point out that Cain wasn’t listed as one of the descendants of Adam, and you ask why. But you never bring it up again, much less offer an answer.

That’s part of this life: You ask God questions and you go without a lot of answers …you learn to live with the mystery of a God who doesn’t tell us all the details. Kids ask their parents a lot of questions. And sometimes parents say to their kids, “Just trust me. You don’t know enough to understand the answer. So just live awhile.” Being a Christian and reading the Bible is not a way to get all your questions answered. There are few answers in the Bible. God is wanting to draw us into a relationship of faith, intimacy, and love. That doesn’t come through information alone. It comes through trust, obedience, and the willingness to be present in the mystery of God. It comes through letting Him reveal himself to us as we’re able to receive the revelation. If God just dumped all the answers on us at once, we probably couldn’t handle it. We’d misuse it. We’d think we had control of it now.