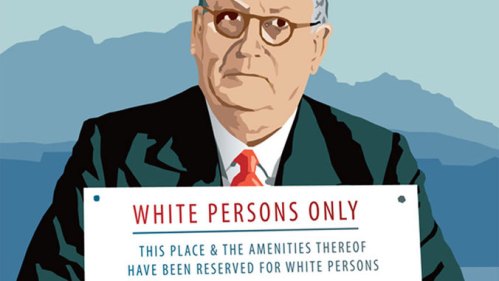 The article below first appeared in the Mail & Guardian on the 2nd of May and is also available on their website (see here).

This past week we celebrated Freedom Day, commemorating 20 years of democracy in South Africa. Naturally the media reflected on the pressing issues of the day, such as corruption, inequality, poverty and the upcoming elections.

One issue that didn’t feature as prominently was the fact that, 20 years into democracy, Stellenbosch University still has buildings and plaques honouring people such as DF Malan and HF Verwoerd, the founders of apartheid.

We have, for example, the DF Malan Memorial Centre, which is used for indoor sports and graduation ceremonies. Malan was chancellor of Stellenbosch University from 1941 to 1959, and prime minister of South Africa from 1948 to 1954, and he was the very embodiment of supremacist racial ideology and paternalistic oppression.

He was the one who implemented “grand apartheid” and infamously concluded: “The Afrikaner has power over the kaffir. But truly, we would not have possessed this power if it had not been given to us from above. Has God not embedded it with a high and holy calling for our nation?”

He was a zealous racial supremacist who argued that, in order to avoid being “submerged in the black heathendom of Africa”, the white minority would have to employ “the armour of racial purity and self-preservation”.

Biographical scholarship has helped shed light on what made Malan the man he was and shows that he was obviously a product of his time. But being able to explain his views and policies in no way justifies or excuses them: this man was directly responsible for decades of oppression for millions of black South Africans.

Without any on-site explanation to the contrary – and there is none at the centre – buildings confer honour and respect on their namesakes. Should we really be celebrating and memorialising someone like Malan? Of course, he should be remembered in South African history, but his place is in an apartheid museum, not adorning an important building at a public university.

If you walk across the river from the centre and into the Accounting and Statistics Building (previously called the HF Verwoerd Building), you will still see a large dedication in the foyer: “In grateful memory of the Honourable HF Verwoerd, Prime Minister of the Republic of South Africa, after whom this building was named on 3 April 1963 and who on 6 September 1966 died in Parliament in the service of his people.”

Teaching the “bantu”
This “honourable” man was the same one who, when discussing his government’s education policies in the 1950s, declared: “There is no place for [the bantu] in the European community above the level of certain forms of labour … What is the use of teaching the bantu child mathematics when it cannot use it in practice? That is quite absurd.” He is also the one who decreed that it was better “to be poor and white than rich and multiracial”.

But perhaps some would argue otherwise, saying: “What is the harm in keeping the names of these buildings given that they were part of our history and that these were great men at the time?” To this I would answer that any achievements these men may have made have been vastly overshadowed by their heinous crimes against black South Africans.

Nefarious policies
I would also suggest addressing this question to any black student on campus whose parents, grandparents and great-grandparents were oppressed and subjugated by these very same individuals and their nefarious policies. Names have symbolic power. A black friend of mine who studied statistics at Stellenbosch University told me earlier this year about how, every time she walked into that building, “it served as a constant reminder of where I was and who I am”.

Malan and Verwoerd are by no means the only link between the university and apartheid: indeed, Stellenbosch was the crucible for Afrikaner Nationalist thought in the 20th century. Between 1919 and 1978, every single* prime minister of our country hailed from Stellenbosch University – Jan Smuts, JBM Hertzog, Malan, JG Strijdom, Verwoerd and BJ Vorster – whether as students, professors or chancellors. They then went on to become the architects and implementers of the oppressive apartheid regime of legislated racial exclusivity.

Oddly enough, there is scant mention of any of this on the university website and no mention whatsoever under the “historical background” section. This is a strange omission. Why is there no permanent exhibition or museum explaining the pivotal role that the university and its staff played in developing and implementing the apartheid ideology? One cannot simply sweep this under the rug, especially when you have buildings named after the perpetrators.

As I see it, there are two possible ways forward. Both would involve permanent recognition of the pivotal role the university played in the conceptualisation, implementation and maintenance of the supremely oppressive apartheid regime. Beyond this, one could also change the names of these buildings and remove the plaques.

Half-baked arguments
I have not found a legitimate reason why we should not change the names and put the plaques in museums, only a few legal trivialities and half-baked arguments about keeping a reminder of the past. But these are not benign reminders: they are commemorations, celebrations, remembrances.

Some see poetic justice in black students graduating in the DF Malan Memorial Centre. But at what price? Without on-site explanations denouncing these individuals, their visibility and prominence translate into honour and respect.

One wonders why we commemorate these fathers of apartheid when there are many anti-apartheid Afrikaners who are actually worth celebrating, people such as Antjie Krog, André Brink, Beyers Naudé, Bram Fischer, Nico Smith and Breyten Breytenbach. But we have no buildings named after these honourable heroes. Why is that?

But perhaps some feel that simply changing names is a shallow way of dealing with an inconvenient truth; or worse, that it amounts to whitewashing history. To these people I would say: fine, keep the plaques in place but then install museum-type exhibitions in situ and do so in such a way that there can be no doubt that these men orchestrated and implemented apartheid. They should not be remembered fondly. Given the university’s pivotal role in apartheid, what better place to have the country’s foremost campus-wide apartheid museum?

Remnants of the past
The fact that we are now 20 years into democracy and still see uncritical remnants of the past is all the more peculiar when one looks at some of the positive developments at the university. Last year it voted to make the student residences significantly more inclusive and diverse, and to promote the inclusion of more first-generation students actively. The vote passed 51% to 49% and was a heated affair, but it also marked an important milestone proving that the university is serious about transformation.

Some might argue that the university should not be singled out from other universities and that there are many examples of similarly offensive buildings and plaques at other institutions. Although I would caution that Stellenbosch is different in that it was the epicentre of apartheid, I agree 100% with the sentiment.

Rhodes University and Rhodes Memorial, for example, are named after one of the most despotic, racist and imperialistic men ever to set foot in Africa. This is the deplorable man who infamously said, “I prefer land to niggers” and “One should kill as many niggers as possible”. I focus on Stellenbosch only because I am studying here and I see these memorials every single day.

There is no doubt that it is one of the top universities in Africa. It is functional, entrepreneurial, safe, efficient and productive, and it has begun to make a concerted effort to become a more racially diverse and inclusive campus.

However, it simply has not done enough to acknowledge its role in apartheid and unequivocally distance itself from its infamous apartheid alumni.

Nic Spaull is a PhD student in the economics department at Stellenbosch University. He can be followed on Twitter @NicSpaull

*This is a corrected version and differs from the printed M&G article. The original M&G article had this as “Between 1919 and 1978, six of the seven prime ministers” which is incorrect and is a small typo from an earlier draft of the article. See here for background info.

For those interested in this issue I would encourage you to read Pieter Odendaal’s open letter (2012) to the Rector of Stellenbosch University Russel Botman, Prof Botman’s reply, Johna Fourie’s blog post on this, and the recent article in Die Matie dealing with the topic.

Are there any alternatives to the two options I propose here? If you can think of any please do post in the comments section below.

One response to “My M&G article on Stellenbosch Uni & apartheid”