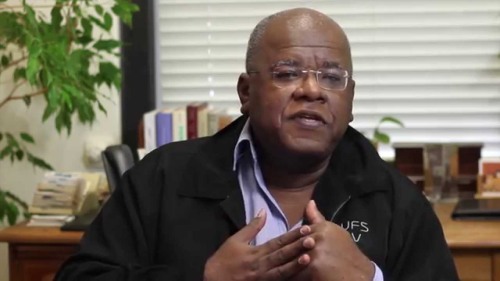 The Q&A with Professor Jonathan Jansen below first appeared in the SAERA “System-wide Educational Change” Newsletter.

You have recently published two new books on educational change that have received critical attention from the public, How to Fix Schools (2014) and Leading for Change (2015). What is it about your thinking that has attracted so many readers?

First of all, everyone knows that there is something wrong in education, those that work in schools and those that send their children there and the general public. So I think that it helps attract a broad readership because of the focus on the issue in the media. Second, I think people don’t just read books they read authors and so the fact that I have been in the public space a lot more in recent years largely through my column in The Times for example. This gives the books the kind of attention that they would not have gotten otherwise. Third, in both of these publications, I try not to deal with these concerns in abstract academic language but to make them as practical as possible and to be as insightful as possible for people who are not specialists. It is for them to enjoy and to spur them to action. And fourth, I try to insert a sense of hopefulness at the end to each book.

Much of your work centres on educational leadership at various levels, particularly the role of leaders in transforming relationships. Can you talk a little about how you conceptualise the relationship between leaders and leadership at institutional level and system-wide policy or programme driven change?

I have more or less given up on the ability of system leaders to be able to make change from the top. I have been around too long to believe that this is even possible. As you know in the early days of the transition, during and after the days of NEPI, I sat on committees of government when there was excitement about being able to say something worthwhile and there was a fair chance that you would be heard by the minister or the DG. I don’t have that sense anymore. My sense is that critics and public intellectuals are being shut out of these kinds of spaces. So I made a conscious decision to engage through visible practices of leadership. Sometimes these gain the attention of those in higher authority. Idon’tthinkwehavea government that is attentive enough or serious enough about educational change to allow practice and research to inform policy. For example, the most profound piece of practical research ever done in the history of this country is the National Development Plan. The diagnosis is profound. And yet, the government seems unable to absorb the good thinking and sound data into development actions. In saying this, I have not strayed too far from my work on the symbolic functions of policy. That is not to say that I am cynical or unpatriotic. Quite the opposite. There is limited space time and space to make a difference. For me, I am able to do this, for example, by working on projects like How to Fix Schools by providing books and videos to all high schools in the country with training support where required.

This doesn’t require working directly with government at national, provincial or local levels on policy.

What do you consider to be the key research areas to focus on for young and mid-career researchers interested in leadership and system- wide educational change?

The first thing to be said to young and mid-career scholars working on system-wide educational change is that it is time for bold new ideas and approaches to the subject. In other words, instead of replicating the kinds of things senior scholars like myself, Pam Christie and Jo Muller have done, a new generation needs to ask different kinds of questions and experiment with new methodologies. The upcoming generation of scholars need to provide new insights about the persistence of certain kinds of problems built into the system of education. Second, we need to move away from the fidelity perspective in policy studies. Too many policy studies still focus on how faithfully people implement this or that policy. When there is a big gap, they explain it as the consequence of ‘stubborn teachers’ or think that policies are ‘stupid’. We need to move beyond this fidelity approach to policy studies and introduce new questions about the relationship between policy and practice. This will take us away from stale formulations. Third, I also think we need to move away from a pre-occupation with analyses of exceptional cases. When we do use them, we need take a fresh look at how they are used. Finally, I think we need to shift our focus from the problem of change to the problem of continuity.

The System-wide Educational Change SIG has had its inaugural meeting this year in Bloemfontein at SAERA. What do we need to do as an emerging research community to build scholarship in our field?

We need to get more people with great potential into the field. That must be the number one priority. We need to connect them with scholars and scholarship around the world. It is not sufficient that they do their PhD studies at UCT, Wits or the Free State. New scholars with great potential need to spend time with people like Alma Harris in the UK or Andy Hargreaves at Boston College. The capacity to speak to local problems in intellectually powerful ways means knowing about and being fluent with educational change discourse and practices in other parts of the world. This would allow us to be theoretically courageous. As you know I have often say that you cannot get very far at UCT without referencing Bernstein or Bourdieu, at UWC without referencing Marx and Frere, and Stellenbosch without van der Walt or van der Stoep. Getting out will allow people emerge from the deeply entrenched tracks of theory and method. Broadening intellectual life requires being international and comparative in focus. Advanced scholars these days need more than a PhD and for a good post-doc experience, they need wider exposure.

We know that you tweet and have a strong presence on YouTube. How should our research community be engaging with the new media space?

This is an important issue less for myself than for a new generation of scholars. I really cannot see how a new PhD scholar in the post 2015 world can work unless they are connected to a whole lot of sites and platforms for their day to day research. Online professional networks provide a platform for your ideas, for your CVs, for the circulation of your research papers. These new media spaces allow for wider audiences to actively engage with your ideas and scholarship. The people I spoke about earlier, Alma and Andy use twitter to give

the latest updates on the papers they are presenting at conferences in Malaysia and Australia. I’m amazed at how a bunch of us get tagged and can engage with their ideas through the simple medium of twitter. I have just recorded a series of lectures on leadership and research that will go on YouTube. And we will see the responses from around the world. We are certainly not going to get far unless there is a consciousness about social media and the technical ability to navigate with these new spaces.

What would you want to see us doing with the SAERA SIG newsletter?

I’m excited about the potential of the newsletter. It can allow us to know more about what everyone is doing around the country. I often get surprised about research that is going on in some institution or another, and I think of myself as being in touch. The newsletter is a forum for sharing new ideas, new questions, and new methodologies. It can also showcase the experts in specific areas. For example, Brigette Smit knows a lot about computerised qualitative data analysis. It also provides a space to highlight what is happening around the world. The newsletter can also stimulate a dialogue between up- and -coming scholars and established academics. I’m amazed at how many emails I get from young scholars asking advice and requesting to be mentored. The newsletter would provide an organised platform for this.

This entry was posted in Q&A, Uncategorized. Bookmark the permalink.