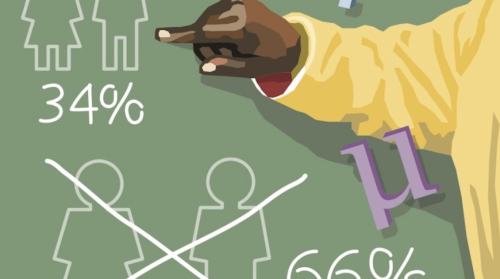 (The article below first appeared in The Teacher magazine in January, and in the Mail & Guardian on the 27th of January 2017)

The month of January is an interesting one in the South African calendar. It seems that this is the one time in the year when everyone cares about education, or more accurately, cares about matric. And in some senses there is a good reason for this; matric is the gateway to higher education. If we look at 25-35 year olds in the 2011 Census data we see that for those with less than a matric, 47% were unemployed (using the broad definition), compared to 33% among those whose highest qualification was a matric and only 8% for those with a bachelors degree. While matric used to be the big distinguisher between the haves and have-nots, increasingly the difference is between those with some kind of tertiary qualification and everyone else. And in 2016, as usual, mathematics proved to be a tough gateway subject for those who want to study further. Only one in three learners who wrote Mathematics in 2016 got 40% or more in the subject, with a recent study showing that only about 15,000 matrics achieved 70% or more in mathematics. That’s about 1,5% of students who start school in Grade 1.

As anyone familiar with maths will tell you, the subject is a hierarchical one that builds upon itself. You need to understand multiplication and division before you can understand fractions or rate and proportion. So where do the wheels come off? Is it just before matric, perhaps in Grade 9 or 10? Or even earlier in Grade 4 or 5? To shed some light on this question we can turn to some recent mathematics research published by the Human Sciences Research Council (HSRC) at the end of last year. Every four years South Africa participates in an international study of mathematics achievement called the Trends in International Mathematics and Science Study or TIMSS. We test a nationally-representative sample of Grade 5 and Grade 9 learners on a standardised international test, which is the same test that is written by thousands of other students in other countries and allows us to compare ourselves to these other countries. (Although almost all the countries test their Grade 4 and Grade 8 students on these tests). The most recent round of tests was done in 2015.

The results showed that only 34% of our Grade 9 learners could do basic mathematics, i.e. could reach the lowest international benchmark. That is to say that 66% of our learners could not do basic computations or match tables to bar graphs or read a simple line graph. They had not acquired a basic understanding about whole numbers, decimals, operations or basic graphs. However there was one piece of encouraging information that emerged from the study and that was that the number of students that could do basic mathematics increased from 24% in 2011 to 34% in 2015 in South Africa, one of the fastest improvements seen internationally.

But if 66% of our Grade 9 learners can’t do basic maths, when did these gaps emerge? In 2015, for the first time in our history, South Africa also participated in the primary-school level of TIMSS that usually tests Grade 4 learners – we tested our Grade 5 learners. It showed that 61% of Grade 5 learners could not reach the Low International Benchmark. Learners who do not reach the low international benchmark at the primary level cannot add and subtract three or four digit whole numbers like 218 and 191. They do not recognise familiar geometric shapes or parallel and perpendicular lines. They cannot read and complete simple bar graphs and tables. For example, according to our curriculum, multiplying a 3-digit number by a 1-digit number is meant to be covered in Term 1 of Grade 4 yet only 41% of our Grade 5 learners could calculate “512 x 3 =____”, which was one of the questions in 2015. So almost 60% of our Grade 5 learners are already significantly behind the curriculum in 2015.

The conclusion that the root of our problems is not in high school but rather much earlier, in the lower grades of primary school is not a new finding – there are many studies showing this from at least 1999. In a report published nearly 10 years ago, one South African education researcher (Dr Eric Scholar) analysed the mathematics achievement in 154 schools across the country. He concluded that the low levels of achievement we see in the higher grades are rooted in weak foundations in primary school. To quote his exact conclusion:

‘‘The fundamental cause of poor learner performance across our education system is a failure to extend the ability of learners from counting to true calculating in their primary schooling. All more complex mathematics depends, in the first instance, on an instinctive understanding of place value within the base-10 number system, combined with an ability to readily perform basic calculations and see numeric relationships … Learners are routinely promoted from one Grade to the next without having mastered the content and foundational competences of preceding Grades, resulting in a large cognitive backlog that progressively inhibits the acquisition of more complex competencies. The consequence is that every class has become, in effect, a ‘multi-Grade’ class in which there is a very large range of learner abilities and this makes it very difficult, or even impossible, to consistently teach to the required assessment standards for any particular Grade. Mathematics, however, is a hierarchical subject in which the development of increasingly complex cognitive abilities at each succeeding level is dependent on the progressive and cumulative mastery of its conceptual frameworks, starting with the absolutely fundamental basics of place value (the base-10 number system) and the four operations (calculation)’’

While as a country we continue to obsess about the matric pass rate, the research is really quite clear. The majority of our young people are acaquiring learning deficits early on in primary school and then carrying these with them as they move through school. As they are promoted into higher grades there is a decoupling between what learners know and can do and what the curriculum expects from them. We need to acknowledge that matric starts in Grade 1 (and even earlier), and that it really is possible to improve primary schooling if that is where we focus most of our time, energy and resources.

This entry was posted in Newspaper articles, Popular press, Uncategorized. Bookmark the permalink.