Do girls do better than boys at school & university? (my Sunday Times article)

The article below was published in the Sunday Times. The article is based on a Working Paper that my co-author (Hendrik van Broekhuizen) and I published this week. The full PDF of that article is available here.  I’ve extended that article slightly by including a few more graphs from the paper.

Do girls do better than boys at school and at university? That’s a question that occupies the minds of many parents and teachers. The short answer is yes, they do. Many people think girls are disadvantaged in education in South Africa, and while that might be somewhat true among the very poorest girls, on average girls actually do better than boys. They learn to read much quicker than boys do (which is true of pretty much all middle- and high-income countries). In South Africa girls also perform better in mathematics. Looking at large nationally-representative surveys from 2011 and 2015 we can see that by Grade 4 girls are a full year of learning ahead of their male peers in reading, despite being in the same grade. By Grade 5 girls are about 40% of a year of a learning ahead of boys in mathematics.

But do these advantages continue into high school and university? That’s a question that my co-author (Dr Hendrik van Broekhuizen) and I tried to address in a paper we released this week. To do this we followed the entire matric class of 2008 into and through all public universities in the country. Using data from the Higher Education Management Information System (HEMIS) we followed all the students from the matric 2008 class that went on to university and followed them for a six-year period (2009-2013). There were 112,402 students in our dataset! Because the Department of Basic Education (DBE) and the Department of Higher Education and Training (DHET) collects detailed information on the results of all students we were able to see whether or not there was also a female advantage in matric and at university.

The results are truly remarkable. We find strong evidence of a large female advantage that continues to grow at each hurdle of the higher education process. To be specific, relative to their male counterparts we find that there were 27% more females who qualified for university, 34% more who enroll in university, 56% more who complete any undergraduate qualification and 66% more who attain a bachelor’s degree. This despite there being roughly equal numbers of boys and girls at the start of school. 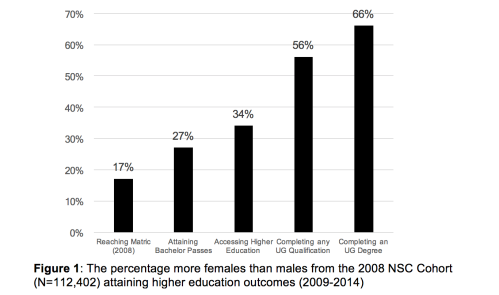 Because of the richness of the data we can also see whether this advantage remains after controlling for various background factors like race, age, socioeconomic status etc. We can also control for school-level achievement. We find that this large female advantage remains after controlling for school-level performance, and exists for all subgroups of race, age, socioeconomic status, and province of origin.

But perhaps it is because females choose ‘easier’ fields of study than males – and that explains the ‘advantage’? The short answer is no. We examine 19 fields of study and find that females are significantly more likely to get a degree in 12 of the 19 fields (often by substantial margins), and are significantly less likely to get a degree in five of the 19 fields. However, this is almost entirely because they do not access these traditionally ‘male’ programs rather than due to lower completion rates once they are in. Only in Engineering and Computer Science do girls do worse than boys once they are accepted to the program. But while there are these  two fields where girls do worse, there are nine where boys do worse (including Health Sciences, Business Studies, Natural Sciences, Psychology etc.). One of the most interesting findings of the paper was that females are always and everywhere 20% less likely to dropout than their male counterparts (including in traditionally ‘male’ fields like Engineering and Computer Science), even after controlling for field of study, race, age, socioeconomic status, and location.

It is important to recognize that South Africa is not an outlier in this regard. The emergence of a female advantage in education (both at school and at university) is a global trend among middle and high-income countries. In the 33 countries that make up the Organization for Economic Cooperation and Development (OECD) – mainly a club of rich countries – 58% of bachelor’s degrees were awarded to women (in SA it is 61%). The question we usually get asked is why is this the case? We don’t really know yet, but the best international evidence points to the fact that girls have more and better “non-cognitive skills.” These are things such as self-control, self-motivation, dependability, sociability, perceptions of self-worth, locus of control, time-preference and delayed gratification. Other scholars argue that schooling is set up in such a way that it favors girls over boys, and favours the traits that society expects from girls or, alternatively those that girls just naturally have more of.

Another conundrum is how it’s possible for girls to do better at school and better at university but then worse in the labour-market? Women in South Africa get paid about 15-17% less than men do for the exact same work (again this is true around the world). The answers here are also complex and link to some easily observable features of society – like who is expected to care for children – and some less observable features like patriarchal norms and gender discrimination.

What our research shows is that girls in South Africa have a clear advantage at school and at university. Any conversation about ‘gender equality’ needs to take into account the disadvantage faced by boys at school and university, but also why this reverses when one moves into the labor-market.

One response to “Do girls do better than boys at school & university? (my Sunday Times article)”