My background note for the meeting with the Minister of Finance Tito Mboweni at the Treasury Economic Colloquium (19 January 2019; South African Reserve Bank), PDF Note HERE.

The education problem as it stands in January 2019:

South Africa today is the most unequal country in the world. The richest 10% of South Africans lay claim to 65% of national income and 90% of national wealth; the largest 90-10 gap in the world (Alvaredo et al, 2018, p. 150; Orthofer, 2016). Given the strong and deeply historical links between education and the labour market these inequities are mirrored in the education system. Two decades after apartheid it is still the case that the life chances of the average South African child are determined not by their ability or the result of hard-work and determination, but instead by the colour of their skin, the province of their birth, and the wealth of their parents. These realities are so deterministic that before a child’s seventh birthday one can predict with some precision whether they will inherit a life of chronic poverty and sustained unemployment or a dignified life and meaningful work. The sheer magnitude of these inequities is incredible. The top 200 high schools in the country have more students achieving distinctions in Mathematics or Physical Science (80%+) than the remaining 6,476 high schools combined [1]. Put differently, 3% of South African high schools create more Mathematics or Physical Science distinctions than the remaining 97% put together. Of those 200 schools, 185 are former White-only schools and all 185 charge significant fees. Although they are now deracialized, 57% of the matrics in these top 200 schools were White. This is less surprising when one considers that in 2014/15, White South Africans still make up two-thirds of the ‘elite’ in South Africa (the wealthiest 4% of society) (Schotte et al, 2018, p. 98).

In a few years’ time when we look back on three decades of democracy in South Africa, it is this conundrum – the stubbornness of inequality and its patterns of persistence – that will stand out amongst the rest as the most demanding of explanation, justification and analysis. This is because inequality needs to be justified; you need to tell a story about why this level of inequality is acceptable or unacceptable. As South Africans what is the story that we tell ourselves about inequality and how far we have come since 1994? Have we accepted our current trajectory as the only path out of stubbornly high and problematically patterned inequality? Are there different and preferential equilibria we have not yet thought of or explored, and if so what are they? In practical terms, how does one get onto a higher economic growth path that is both sustainable and inclusive? Does anyone really know how to ‘create’ jobs apart from higher growth and a more skilled workforce? The latter of which is not possible without improving the education system, so how does one get to a more equitable and improved distribution of teachers, resources or learning outcomes? And what are the political, social and financial price-tags attached to doing so? These are the questions that should stand front and centre in our national discourse and with which the next elected government must grapple.

The education problem as it stands in January 2019 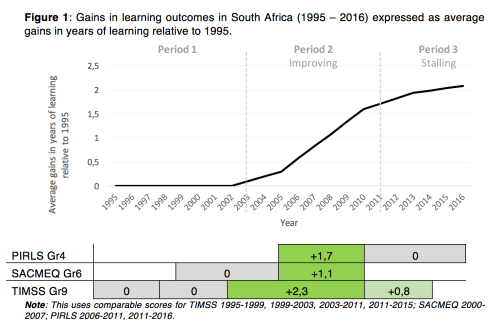 While the international assessments are the most reliable indicators of progress in education, there are also other pieces of supporting evidence, including the fourfold increase in black university graduates between 1994 (11,339 black graduates) and 2014 (48,686 black graduates) (Van Broekhuizen, 2016: p.12), and the large increase in the number of matriculants receiving mathematics marks which make them eligible for engineering at university, increasing from 18,601 to 25,054 between 2002 and 2016 (Van der Berg & Gustafsson, 2019).

Figure 2: Current provincial per learner expenditure on basic education 2010 to 2019 (Own calculations using real cost drivers and expressed in 2017 Rands, 2017-2019 projections based on MTEF) 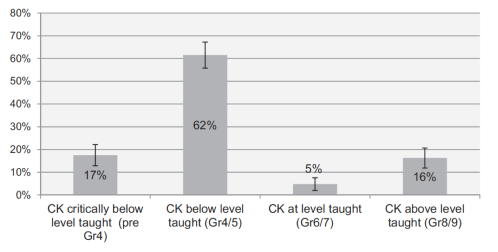 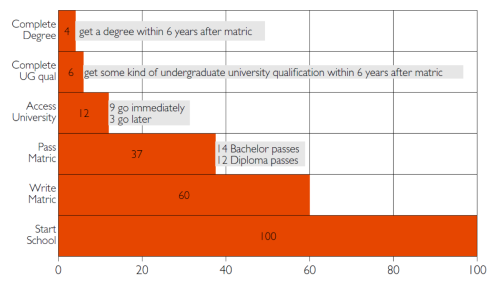 “In 47% of [South African high] schools there was not a single learner who reached 475 points, the TIMSS Intermediate International Benchmark. In this respect South Africa did much worse than any other country… [The comparable figure in Botswana is just 2%]. The comparison with Botswana is particularly important, because Botswana is within the same region but also because both Botswana and South Africa tested Grade 9. In the context of South Africa’s skills shortfall and the need for more black professionals, it is particularly problematic that a large segment of the schooling system are in effect ‘academic wastelands’ which do not produce even a single learner performing at the intermediate international benchmark.

Figure 5 below illustrates this point by showing the “effective” grade that children are in at each stage of the schooling process. If we look at the no-fee schools (poorest 80% of schools), learners are approximately 2,5 years behind the curriculum in Grade 3. By Grade 9 they are 4-5 years behind the curriculum, showing the compounding effect of not getting primary school learning right.

Figure 5: South African mathematics learning trajectories by national socioeconomic quintiles using a variable standard deviation for a year of learning (0.28 in grade 3 to 0.2 in grade 8 with interpolated values for in-between grades (Based on NSES 2007/8/9 for grades 3/4/5, SACMEQ 2007 for grade 6 and TIMSS 2011 for grade 9, including 95% confidence interval (See Spaull & Kotze, 2015: p.21) 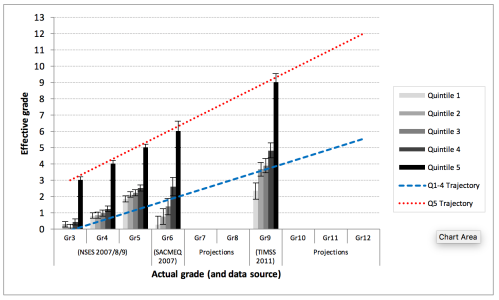 Figure 6 below indicates that South African high-schools lag behind other developing countries when it comes to access to computers. However the evidence-based approach to remedy this is (1) focus on ensuring all high-school have functional computer laboratories (rather than one device per child, (2) piloting and evaluating teacher development programs on the use of ICT-in-teaching, (3) piloting and evaluating different software and apps to see which of these are most likely to be beneficial to learners and teachers. 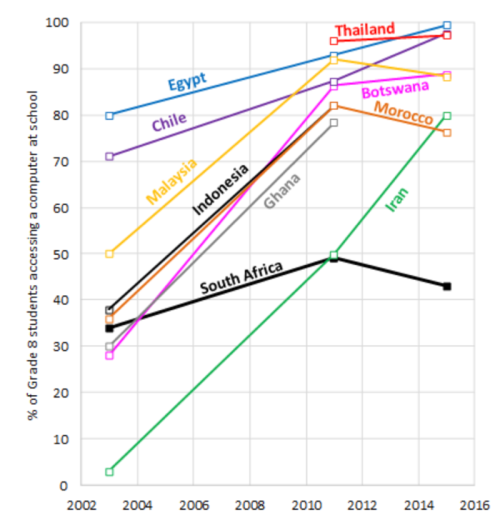 Summary of the evidence from comparison countries:

Spaull, N. and Kotze, J. (2015). Starting behind and staying behind in South Africa: The case of insurmountable learning deficits in mathematics. International Journal of Educational Development. Vol 41 (March) pp12-24

Trucano. M (2016). Questions to ask (and not to ask) when your president tells you to buy 100k (or a million) tablets for students. World Bank. EduTech. (Online). Available: https://blogs.worldbank.org/edutech/educational-tablets-questions-to-ask

Venkat, H. and Spaull, N. 2015. What do we know about primary teachers’ mathematical content knowledge in South Africa? An analysis of SACMEQ 2007. International Journal of Educational Development. Vol. 41 Mar. p.121-130.

World Bank. (2009). The Use and Misuse of Computers in Education: Evidence from a Randomizes Experiment in Colombia. Policy Research Working Paper 4836.

Appendix B: Status of Technology in SA Schools (Source: Ostrowick, 2016) 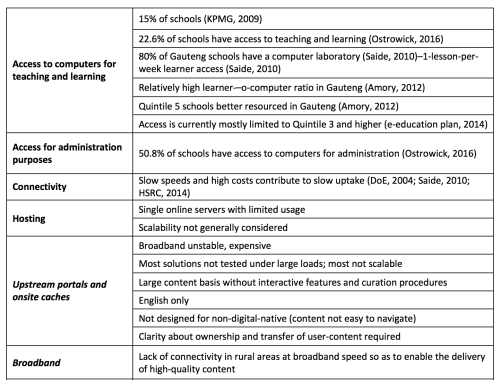 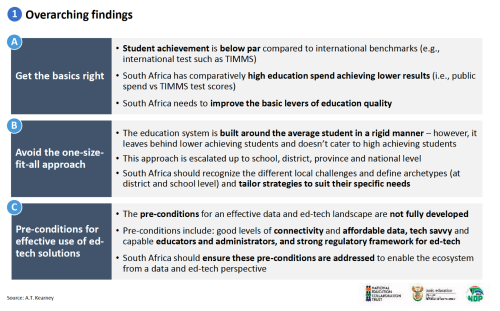 [1] This is based on my own calculations on the Matric 2014 National Senior Certificate data (i.e. it does not include IEB candidates, but does include independent schools that write the NSC. ‘Top’ here is defined as the largest number of mathematics distinctions (80%+). In almost all of these schools there are at least 9 mathematics distinctions per school. Note also that 23 of the 200 schools are independent schools writing the NSC exam.

[2] This is based on my own calculations using Treasury’s Estimates of Public Revenue and Expenditure (EPRE) data which is available on their website.

[3] This demographic phenomenon has been confirmed by Home Affairs birth registration data as well as age-specific data in the Department of Basic Education’s Annual Survey of Schools (ASS) and the Learner Unit Record Information Tracking System (LURITS). The leading explanation is that the rise in births coincides with the roll out of Anti-retroviral (ARV) treatment. Thus larger cohorts of children have been moving through the schooling system, with the ‘surge’ reaching Grade 8 in 2018