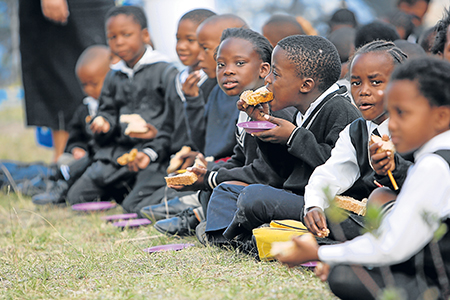 The coronavirus pandemic working its way through South African society will have many knock-on effects, one of them will be hunger and malnutrition as 9-million children no longer receive free school meals while their schools are shut.

The population of South Africa today is 59-million people, and nearly a quarter are school-going children enrolled in Grades R-12 (13-million kids). One of the under-celebrated achievements of the ANC government over the last ten years has been the mass rollout of a successful school-feeding scheme to all no-fee schools in the country (Quintile 1-3 schools) – The National School Nutrition Programme. To give you a sense of just how vast that network is, of the 13-million kids in school, 9-million receive a free school meal every day they are at school. Put differently, of all the weekday ‘lunches’ eaten in South Africa, one in six are provided in schools under this program.

In order to fund this the government spends R36-million a day to feed these 9-million kids, amounting to R7.2-billion for 2020 according to the most recent budget. The big question now is what happens to those meals and those kids while their schools are shut because of the coronavirus? I’d like to point to what we know about hunger in South Africa, whether the NSNP program is effective, what other countries are doing and what we should be thinking about.

Firstly, South African schools were going to shut for the first term holidays anyway – we just closed them three days early. The Minister announced that schools will be closed until 14 April 2020, and if you count the school holidays and public holidays in that period there are only 11 school days (even though schools are closed for a whole month). While that might not sound like a lot, any extension of school closures (which seem almost inevitable now) will materially start to affect children’s nutrition, and for some kids, also their immune systems.

The nationally-representative 2018 General Household Survey can help shine some light on the extent of hunger in South Africa. Three stats are telling: (1) When asked “Did your household run out of money to buy food during the past 12 months?”, 22% of households answered “yes.” (2) For households where was at least one child (17 years or younger), 16% reported that in the last year a child went hungry in that household “because there wasn’t enough food.” And (3) according to the StatsSA 2018 GHS report of 2018, 20% of households had “inadequate” or “severely inadequate” food access (p.67). So, even with the NSNP in full-swing, and 9-million kids getting their meals Monday to Friday, the GHS shows that about one in six South African households with kids experience hunger or food insecurity. Similarly, the National Development Plan (NDP) states that “stunting affects almost one in five children (18%), and…about one in 10 children are underweight” (p.299).

There is also corroborating evidence from a 2016 evaluation of the National School Nutrition Programme by JET Education Services. They surveyed 267 schools in 2015 and found that 4% of learners “did not eat at home last night” and 23% “did not eat breakfast.” (JET, 2016: p.58). Encouragingly, 96% of schools did actually serve the main meal indicating that the program is working very well.

South Africa is not the only country experiencing this problem. According to UNESCO over 100 countries have shut all schools as a result of the coronavirus. Most have some form of school feeding system for selected learners and now all are scrambling to find ways of providing meals to those that rely on them. In the US a number of cities have implemented a “grab and go” system, including in New York, Atlanta, Detroit, Milwaukee and Washington D.C. where distribution points and catchment zones dictate who can collect from where.

There are still no reliable projections as to how the coronavirus outbreak in South Africa will unfold but one thing is certain: there is no world in which the situation in South Africa is less severe in three weeks’ time (when schools are scheduled to re-open) than it is now. If schools are going to be shut for months, then provincial governments need to come up with contingency plans for how they will help poor families provide food for their children. Currently there are no plans in place for sustained school closures. Minister Motshekga has been quoted as saying “We are not going to run special programmes … We won’t be able to do it, so parents must take that responsibility and communities must assist.” If the Department of Basic Education is reneging on its responsibility it should give the school nutrition money to a department that is willing and able to come up with a solution. When one in five children are hungry and rely on these meals for their basic needs, it is clear that free school meals have become part of the social infrastructure that millions of South African children rely on. We cannot simply ignore that because of the logistical complexities involved. The money has already been budgeted and allocated, now provinces need to find innovative ways of getting meals to kids while schools are closed.