From petrol-attendant to President of the Supreme Court of Appeals SA: Judge Lex Mpati 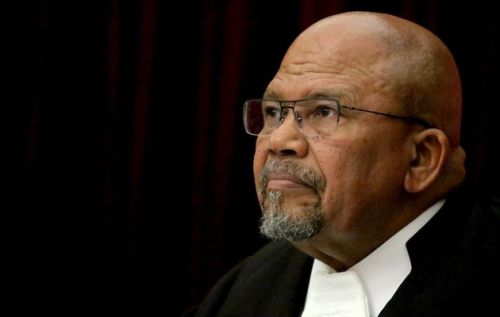 This is the story of Judge Lex Mpati who went from being a petrol attendant after matric to the President of the Supreme Court of Appeal and Chancellor of Rhodes University where he studied (bartending on the side to pay for his studies). Such an inspiration that we have people like this who have gone from the very bottom to the very top.

“When you drive around Grahamstown in the Eastern Cape with Judge Lex Mpati you take in the tour of his life, starting at the old garage in Beaufort Street.Here, as a young man he worked as a petrol attendant and felt proud to be earning his own money. It was his first job after completing matric at Mary Waters High School in Grahamstown. His family had sent him here from Fort Beaufort where he grew up on a farm and attended the Catholic school in town, which stopped at Grade 8.Our tour continues, and we drive on to the motel where he once worked as a bartender. He recalls how kind the owner and manager were to him when he told them he wanted to study law. They encouraged him and allowed him to fit his bartending hours around his classes and studies.

Next is the furniture shop where he once worked as a salesman. This is the only job he has ever hated because he could not bear to see people being hoodwinked into hire purchase contracts they could not afford.Judge Mpati’s first home in Grahamstown was the two-roomed home in Victoria Road in the township of Fingo Village that he shared with his mother’s brother while schooling and later with his wife Mireille.From here we head across town to Rhodes University where he achieved his dream of studying law; a dream that started when he was arrested for illegally operating as a taxi at the railway station in 1968.

“I had just completed the night shift at the garage when I decided to make some extra money as I had the use of my grandfather’s car at the time,” he explains. “It was December and a lot of people were arriving by train, so I headed for the station and offered my taxi service. I was about to drive away with my clients when the police stopped me and charged me with pirating as a taxi.”He was given the option to pay a fine or go to court and he chose the latter. “I decided to defend myself and came up with a story about how I had gone to the station to pick up family members who didn’t arrive,” he recalls. “I explained that as I was leaving some people at the station had asked for a lift. When I told them I didn’t have enough petrol to take them home, they gave me 30c for petrol, which is how I came to be in possession of the money, which was quite a bit at the time. It cost 34c per gallon for regular and 38c for super. I felt I had done fairly well when I was found Not Guilty!” he smiles.It was not his first time in the magistrate’s court. Out of interest he had sat in on several cases when he had time off from the garage.

“I attended all sorts of cases – from early political trials of student activists from Healdtown and Lovedale to criminal cases. I would sit in the back listening to the charges being put to people and agonise over how they tried to defend themselves. Mostly they were black people and not being educated they were not able to conduct a good defence.”
He would get upset when people were sent to jail simply because they couldn’t ask the state witnesses the appropriate questions. “It was clear to me that the justice system was simply not working well and too many people were going to jail. That is what pushed me to decide to do law, I felt they needed someone who could defend them.”

Judge Mpati started his law degree at Rhodes in 1979 at the age of 30, paying for his first year with his earnings as a bartender. In his second and third year he received a scholarship, which covered his studies with some change to buy books. By this time he had met, courted and married Mireille who trained as a teacher and later as a nurse.In his third year he started working as a clerk for a legal firm in Grahamstown and stayed on after he graduated.“I mainly did criminal cases, which is precisely what I wanted to do. I was fulfilling my goal of helping people and I felt very good about it,” says Judge Mpati who was admitted as an attorney in 1985. “What made me especially proud was when people from my community would come up to me and tell me I had inspired them; that they had watched me go through university and qualify and it gave them the confidence to further their studies.”In February 1989 he joined the bar. Now an advocate he worked on his own from his chambers in Grahamstown until 1993 when he took up the post of in-house counsel at the Legal Resources Centre and immersed himself in human rights work in the Eastern Cape.“It has always been important to me to contribute to the growth of a society in which we can respect each other, not as a white person or black person, but as human beings who want to contribute to peace and upliftment in our country.”

In 1997 after he had served as an acting judge for a period of eight months, he became a judge. Two years later he was invited to the Supreme Court of Appeal in Bloemfontein where he was permanently appointed in 2000. Eight years later he was appointed President.While he is based in Bloemfontein, Grahamstown is still his home and he and Mireille return whenever they can. They now live in Knowling Street, which is part of the tour, and this is where they raised their four children. Lyle (40) their eldest is a Mechanical Engineer, Dawn (38) is an attorney, Ludi (26) is in IT and Demi-Lee (21) is studying law through Unisa.Judge Mpati is now in his fifth year as the President of the Supreme Court of Appeal, which he describes it as “an extremely challenging job”.“The judges at the Supreme Court of Appeal need to be the best in the country, and we need to maintain that standard but at the same time we need to see the judiciary transform, particularly when it comes to race and gender,” he explains. “As part of the process of transforming the judiciary you appoint a combination of the best judges and judges with the best potential to reach the level at which you wish to maintain the court.”

In February this year Judge Mpati was appointed Chancellor of Rhodes University.“It feels as if my life has come full circle,” he says. “When I arrived in Grahamstown as a young boy I could never have imagined that one day I would be the Chancellor of the University I attended and of which I am so proud.”Commenting on his appointment, the Vice-Chancellor of Rhodes University Dr Saleem Badat said: “Judge Mpati personifies the values we embrace at Rhodes of rising above self, of modesty, commitment, excellence and ethical behaviour. His is an inspiring story and we are honoured to have him as our Chancellor.”

From here (via Janet Love).