Tonight I am angry

It’s currently 9:28pm and I’m sitting on my hotel bed in Pretoria oscillating between anger and tears. Today was the first day of a UNICEF conference on Early Childhood Development and I was presenting on insurmountable learning deficits (PPT here). It’s strange that I feel so emotional because it was an extremely successful day of presentations from people like Marie-Louise Samuels, Linda Biersteker, Linda Richter and Mark Tomlinson – all giants in the field of ECD. And yet, here I am clenching my jaw, crying, listening to the aircon and wondering how we got here. Fuck. I keep thinking of one line from Neruda’s poem:

“Sometimes I wake up early and even my soul is wet”

I find it really difficult to hear about the lived reality of people with disabilities. After the conference closed today I had a long conversation with Jean Elphick, an inspiring woman who works with disabled children in a township in Gauteng. She told me that most disabled children (51%) on their program stay at home each day and only a small proportion go to an appropriate school (watch this 4-minute video from Afrika Tikkun). They have been trying to get these kids into schools for three years, but with very limited success. The part that really hit me was when she told me that 15 of the disabled children she works with had been abused and some had been raped. Fifteen. Boys and girls. The children that stay at home unsupervised are especially vulnerable since they have no sexuality education and limited people outside the home to disclose to or confide in. Hardly any of the sexual abuse/rape cases of these children are ever heard in court and when they are rarely result in convictions. She told me about rape cases where there was even DNA evidence and yet the case had been shelved.

“In 2011, Ikhaya Loxolo had 10 residents, nine of them female. They were between 10 and 22 years old. “All nine had been raped previously – some repeatedly,” says Gunther. “The worst thing is that it happens so often that it’s normal to the community. It’s what happens to a mentally disabled girl.” One of the girls was raped when she fetched water from a spring near her home. She was 10 at the time. Another, a 14-year-old, was raped when she went home for the Christmas holidays. “There was no one to look after her and a drunk guy came into the house,” says Gunther. “He locked the door and raped her.”…”Rape is like a plague here. A lot of women and girls get raped but it’s especially the mentally disabled girls. These men know very well that these girls are mentally handicapped. That is why they target them, because they’re easy prey: they can’t fight back and mostly they can’t identify their attackers.” When a mentally disabled girl is raped in the district, says Gunther, her parents are “sad” about it, “but not shocked, because it happens all the time.” 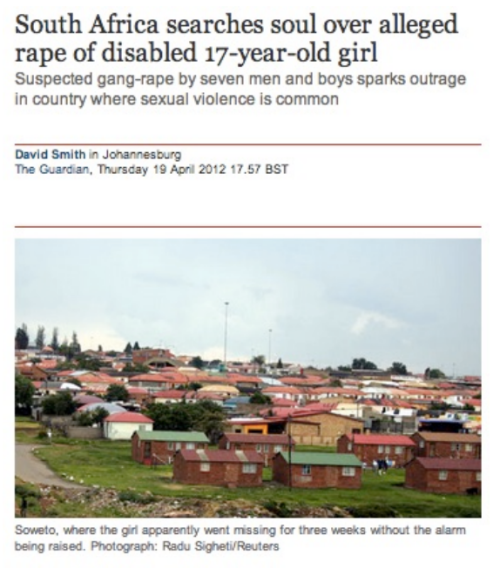 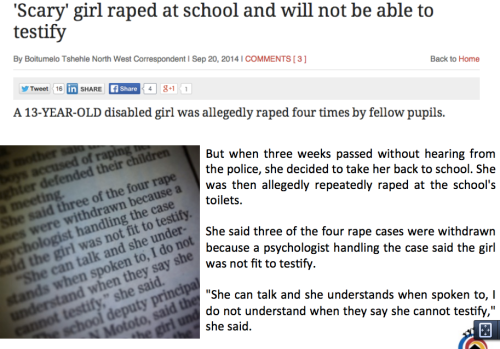 Last night I heard another tragic story about a disabled illiterate person. My good friend (and hero) Veronica McKay was telling me about some of the people that take adult basic education classes (ABET) called Kha Ri Gude. The program aims to provide basic numeracy and literacy skills to illiterate and innumerate adults and is available across the country. As part of the drive to recruit participants they go door to door in the community and ask if anyone wants to join the classes. She told me that often the disabled men and women said that they were locked away in a room and only brought out and dressed up when the disability grant was collected each month. This is one of the reasons why some said they enjoyed the adult literacy classes – for some it was their only social interaction during the week.

At the beginning of the KRG program they ask participants to list what they want to gain, or be able to do, by the end of the program. This helps them tailor the classes to the needs of those participants. Some people say they want to be able to read the Bible, others that they want to open a bank account and others that they want to use an ATM. One of the illiterate participants (who was also disabled) reported that after the program she went to the ATM herself and withdrew the money from her disability grant, where previously her grandchildren did this for her. She reported that now she was receiving much more money. Basically she realised that her grandchildren were keeping some money for themselves and she didn’t know it because she was innumerate and illiterate. Veronica told me that after the course many of the participants said they felt much more empowered and confident to go outside. One of the blind Kha Ri Gude trainers, who now trains others who are blind and illiterate (using Braille) reflected on the KRG program and said: “Now people take me as a role model and they believe that if you give someone a chance then they can do what they want to do. Many people in Kha Ri Gude say to me, ‘Thank you, you revived my life.’

On a different occasion Veronica told me about one previously illiterate woman who, when asked why she did the course said, “Because now I know when I have enough money to go to the shop to buy things. Also if the shopkeeper gives me the correct change. Before I just had to hold out my hand with the money and the shopkeeper would take the money and give me back the change. But I couldn’t tell if it was the right change. I think he wasn’t always giving me the right change. Now I can tell.”

In keeping with the national tone of reflecting on the one year anniversary of  Madiba’s death, I include a quote from the Unifier:

“We have tried to give special emphasis to the rights of people living with disability. It is so easy to think of equality demands with reference primarily to race, colour, religion and gender, and to forget, or to relegate to secondary importance, the vast discrimination against disabled persons” – Nelson Mandela (Message to the Conference for the Disabled, 4 April 2004).

This entry was posted in Disability. Bookmark the permalink.

5 responses to “Tonight I am angry”